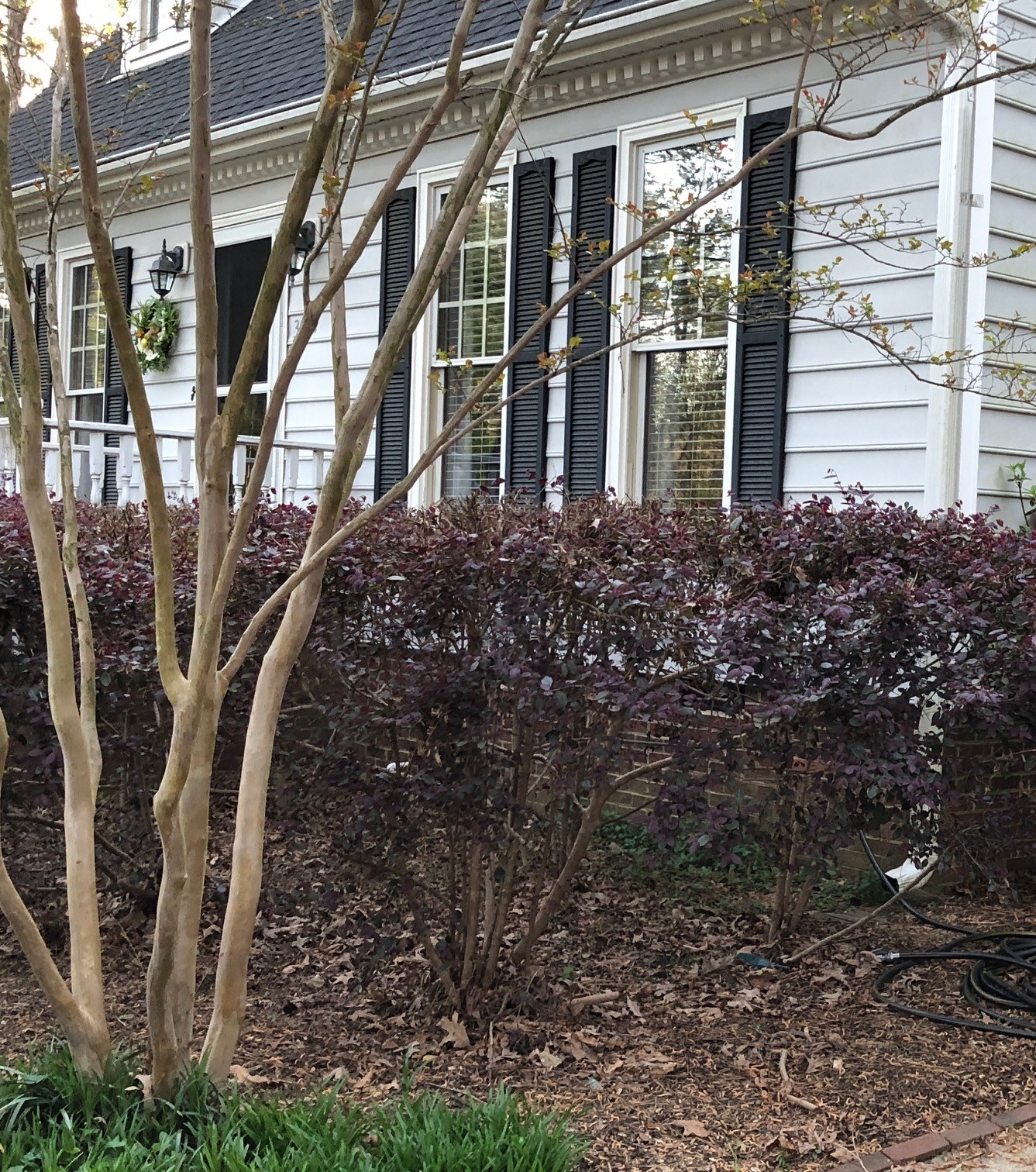 One March day a few years ago, after a rather wet and chilly start to the year, the weather had begun to turn a bit milder, which meant I was out working in my garden and yard.

As usual, this started out with coffee on the deck, which led to severe pruning of an overgrown hot lips salvia, cutting back stalks of dormant lantana (which will eventually be dug up and moved), raking out debris, mowing the grass and giving the liriope its annual haircut.

When I was finished, I took a good long look at the fruits of my labor and five minutes later wandered to the front of the house, where my eyes settled on the sparse, overgrown, and generally pitiful looking lorapetalum. There were 12 of them in all – six on each side – yet another poorly chosen foundation planting that absolutely bullied its way into the space and became much, much larger than life.

Lorapetalum is a beautiful bush that does very well in central North Carolina. It has deep red to purple leaves, and gets fringed flowers on it at some point each year. But what the garden centers don’t tell you is how very large it can quickly grow. It’s great for a privacy hedge at the far reaches of the yard, but not so great in front of the house. I seriously had gotten accustomed to hacking them back three times a year, a dirty, messy job involving lots of little leaves that stick to your clothing and uncontrolled branches that threaten to impale you while you wield the electric hedgers. The alternative was to let them grow, but I kind of like seeing out my front windows (both downstairs and upstairs).

So, I stealthily fetched the loppers from the shed and started cutting. Just a little. Maybe a little more. Pruning with reckless abandon until they were BARE. And although I knew they would regrow their leaves in a few weeks (months) they looked pretty bad at that moment, my friend. Pretty bad. My husband, who eyes me dubiously every time I get going in the garden, about had a heart attack when he rounded the corner.

“I left you alone for ten minutes!” he said.

And, having been married to me for far too long, he simply shook his head, for he knew. He knew this was just the beginning. He knew there was a 50/50 chance I’d talk him into ripping them out altogether in favor of something different, which would cost some not insignificant amount of money.

He was right – I was already envisioning a cottage garden in the space. With all of the bulk gone, I could see the possibilities much more clearly. I pulled out my phone, pulled up Pinterest, and showed my visual learner of a husband how glorious it could be.

“The time of year is right!” I cooed. “We can leave a few in the corners and move the others to the back property line.”

He grumbled, but I won out. Well, sort of. He refused to help pull them out of the ground. For the next hour, I lopped, I sawed, I tossed, I pulled, and I dragged. Fortunately those suckers just popped right out of the soggy clay that inhabits that particular part of the yard. During my frenzy, I had regrets. Oh, but I had committed – I was in it to win it now, and it was too late.

As promised, I left four lorapetalum skeletons flanking the front steps. I moved the other eight along the back of the property (which we promptly left unplanted for too long since the soil back there is more of a compacted cement sort of clay material mixed with nefarious Voldemort roots that run to the center of the earth). We eventually sort of got them into the ground. I spent the next month examining the branches, both in the front of the house and out by the property line for signs of growth, grabbing my husband outside to point out the tiny purple leaves slowly populating the wood. The four in front of the house survived, as did four that we transplanted. Four died. C’est la vie.

Fast forward a year. The lorapetalum we left in place have filled out beautifully – they will still require regular pruning. The $300 worth of anise, azalea, and camelia are doing quite well. I’m slowly filling in the front with iris, astilbe, black-eyed Susan and hosta, all of which I’ve dug up from some other area of the yard. The deer have eaten the hosta to the ground (and it’s only May!), but it’s coming along and my husband agrees it’s better.

I was walking around the yard just the other evening thinking how nice it all looked. Except for the eleagnus in the back corner. We purchased it for $4 a piece from Broadwell’s in Angier, NC (an absolute must-visit for anyone who needs a variety of inexpensive landscaping to get them started). I’m not so sure about the eleagnus. Some people in my Facebook gardening group call them Ugly Agnes and claim they can be invasive. But when I wander to the shed (for something else I swear!) the loppers seem to have gone missing. I guess I’ll leave Agnes be for now.

Here’s some nice information from Plant Delights Nursery in Garner, NC about lorapetalum which basically warns people that this is NOT a foundation planting!